A USB cable for hacking computers will soon be on sale 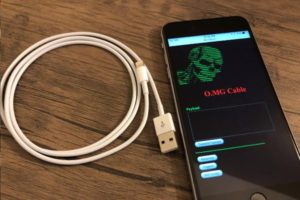 After connecting the cable, the criminal can remotely run commands and gain access to the victim’s files.

Soon, a cable will appear on sale that looks like Apple’s official Lightning cable, but actually allows you to remotely hack computers. Security researcher Mike Grover, who developed this tool, announced the successful start of production.

O.MG Cable is a cable that not only charges phones and transmits data just like an Apple cable, but contains a wireless access point that an attacker can connect to. After that, the offender can run commands on the computer and gain access to the victim’s files.

“The O.MG cable is the result of months of work that resulted in a well-camouflaged malicious USB cable. As soon as the cable is connected, it can be controlled using the wireless network interface built into the cable, ”says the website of the Hak5 company, which is engaged in mass production of the product.

According to Grover, despite the obvious harmfulness of O.MG Cable, it was created with good intentions. Using this device, he wants to prove that threats can come not only from the Internet and various drives, but also occur among seemingly harmless cables.